Stop Being “Nice.” A Guide for Straight-Talk Guidance that Grows Your People 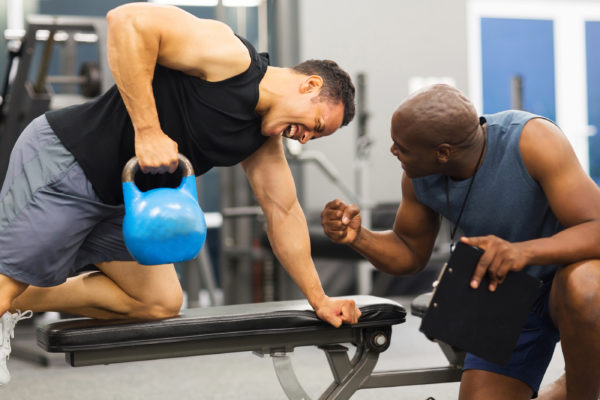 At the gym the other day, stretching before a workout class, two men were sparring nearby. Mid-30’s, and mid-40’s, with humor but focused. Glove-less jabs and shoe-less rapid-fire kicks flew, interspersed with the ding-ding-ding of a timer set to note the end of each short round. Between each round, straight-talk, rapid-fire feedback was given, received and incorporated into the next practice round. These two were totally focused on increasing skills and achieving better performance. One man more advanced giving feedback to grow the other’s competence at something they both care about.
Sports leaders are hired for their ability to grow individuals and a team. They are quickly fired when the skills do not improve, when the team does not go on to succeed. Measurements of growth and success are clear. Everyone is there to improve skills. For team success. They are there to get better.
It made me think of the difference between the sports-world and the business-world.
We expect and seek out straight-talk coaching in the world of sports. We hire trainers to kick butt – to lose weight, get stronger, avoid injury or achieve whatever our physical goals. We hire them for straight-talk, tough-love. So we get better.

The Stakes Are High

Guidance that Grows Your People to Achieve Company Outcomes

No matter the size of your business, your employees are key to you future success. If you or your company lack a clear, consistent process for giving feedback that grows individuals, and thus the team, here’s a solution to develop your skills in guiding others for growth.

Your employees are key to you future success. If you or your company lack a clear, consistent process for giving feedback that grows individuals, and thus the team, here’s a solution to develop your skills in guiding others for growth.
It’s a simple tool, a simple formula developed out of the work experience of Kim Scott, as she observed what made companies hum and their workers radiate a joy in their work. It’s a tool to ensure that your team gets the right kind of guidance — she calls it ‘radical candor.’
Scott’s bio says she’s “built her career around a simple goal: Creating bullshit-free zones where people love their work and working together.” Her experiences include her own software start-up, a long-time position as director at Google, teaching at Apple University, and consulting to such companies as Twitter, Rolltape and Qualtrics.
Here’s a brief outline to whet your skills.Then take a look at the full article and a great TED-like video presentation from First Round given by Scott.

First off, Scott calls this Guidance not feedback. An important distinction. She promotes giving it, receiving it and encouraging it throughout an organization. Guidance is different from feedback, which is typically just praise or criticism.
Those of you who have read my former articles on Dr. Carol Dweck’s research and concept of Growth Mindset will recognize compatibility here.

Scott acknowledges that telling people they have screwed up or that there is a better way to do something feels impolite, for some it may feel unkind. So here’s a tough-love message you may need to hear if this is your hang-up.
She says:
“Once you become a boss, it’s your job to do be equally clear about what’s going wrong, and what’s going right. I would argue that criticizing your employees when they screw up is not just your job, it’s actually your moral obligation.”
“John Stuart Mill explains it very well. He said, ‘The source of everything respectable in man, either as an intellectual or as a moral being, is that his errors are corrigible.’ The whole strength and value of human judgment depends on the one property that it can be set right when it is wrong.’ You have to tell people when you think they’re wrong or their work isn’t good enough,” Scott says.
I might add it’s a huge grown-up skill and learning to give such guidance not only grow up your people, its part of growing yourself up as a leader.

A Formula for Giving Guidance

Scott’s formula for guidance is based on 2 axis so you can assess where you fall when guidance is needed. 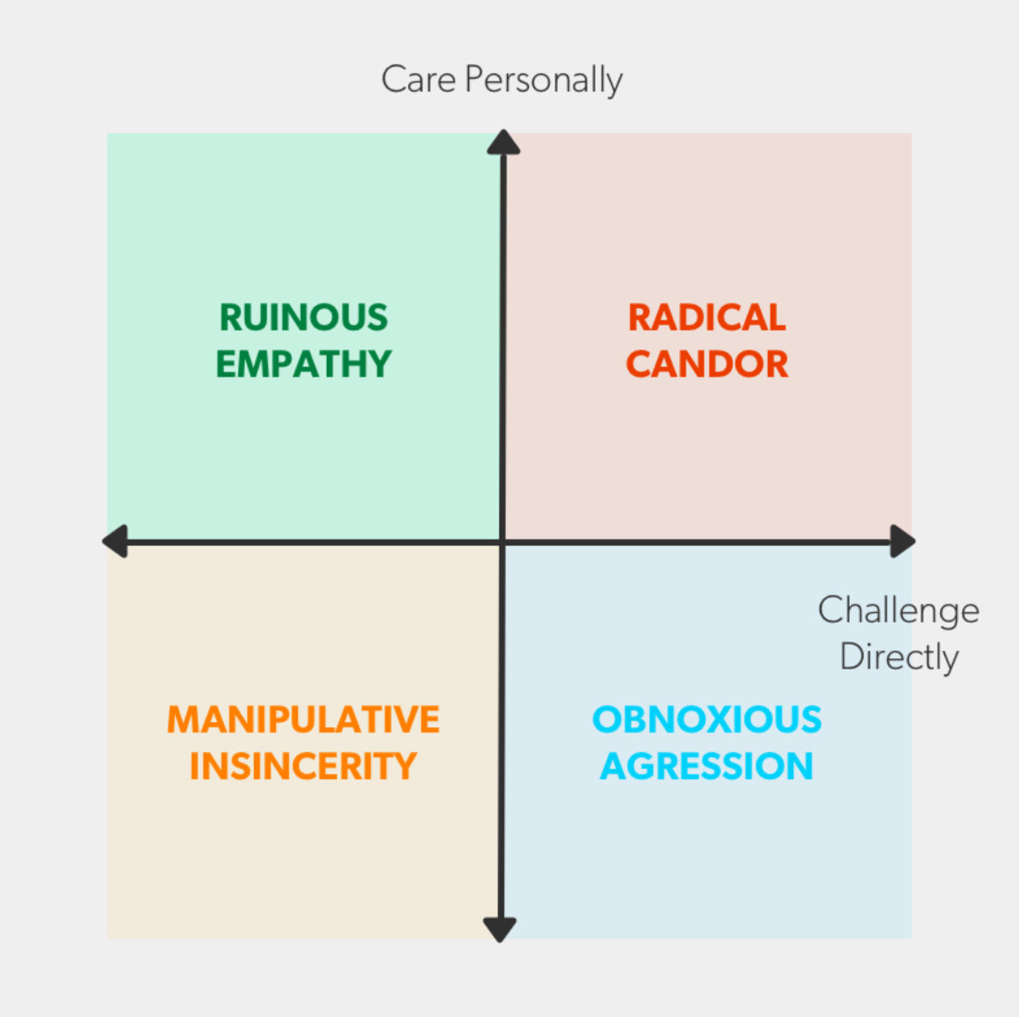 (This chart is borrowed directly from the article and presentation in the First Round Review cited in this article.)

AXIS I: Give a Damn

The first axis is Caring Personally or what she calls “Give a damn.” It’s a relationship and environment in which guidance is free-flowing is one built on trust. It only works when people know they are cared about. So they can hear and receive, digest and incorporate the information given.
Such guidance is given without shame or blame. Cleanly, clearly and immediately. It’s focused on the behavior and given directly to the individual.
It doesn’t personalize.
In private when it’s negative.
In public when it’s positive.

AXIS II: Be Willing to Piss People Off

The horizontal axis is Challenging Directly. It’s there to help you modulate being “nice” or “polite.” These are assessed against the need to guide and grow individuals, the team and the company.
Just think. People spend huge numbers of hours in your environment every day. They inherently desire growth. Don’t personalize their response to the growth challenge if it’s initially not mature or negative. As you infuse your company or team with such guidance most will be appreciative and grow along with you.
Those that don’t, Scott shares her views on moving into the Obnoxious Aggression quadrant as needed. She says: “If you can’t offer radical candor, the second best thing you can do is be an asshole.” She’s not promoting being a jerk, but it’s better than manipulative insincerity, passive-aggressive behavior, gossip or “ruinous empathy.”
Kim Scott has personal stories about how she arrived at her methods. Read more and see video here: Kim Scott speaking at First Round’s recent CEO Summit.

Keeping the Personal out of Professional Communication

Impartial Management: Doing Away with Favorites

3 Productivity Practices that Pay Off in a Big Way

Dr. Jan Hoistad
Founder & Lead Coach at DJHPartners, Inc.
Whether it’s for your career or your business, Dr. Jan Hoistad is a career development and transition coach, and a business development coach and strategist. Her uniqueness is her “Big Picture” perspective. Assisting business owners and experienced career professionals, Dr. Jan partners with you as you transition through choice points in your career and business life. Her focus is on helping you clarify what you want, identify what’s in the way, and strategize a step-by-step plan so you achieve your goals.

Dr. Jan brings her expertise in human development, system dynamics, entrepreneurship, business growth, partnering, communication and creativity, her clients to her clients who become catalysts for change in their businesses, careers, and personal lives.

Her Big Picture approach helps you to accomplish so much more of what you desire. Working with Jan you go further, faster. Her work guides you to accelerate, while also integrating your professional and personal goals at each choice point across your life.

“When an experienced professional adds ChoicePoint Solutions, you can almost feel their body relax. They become excited again. More hopeful, they remember what they love about their work as, together, we turn burdens into doable strategies that achieve their future goals.” — Dr. Jan 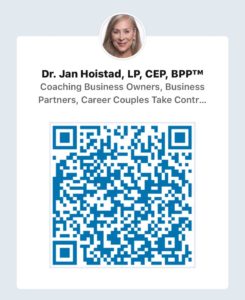 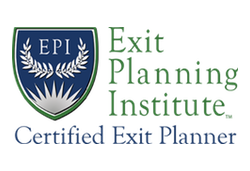